Antarctica: Beyond the end of the world

Tierra del Fuego is described as El Fin del Mundo (“the end of the world”), but there is more to see further south – and we decided it was worth taking the opportunity to board a boat, suffer 5 days in the worst seas in the world, to go see…

Despite the ticket price, a trip to Antarctica had been a line item in our budget right from the start. How you put a price on such a trip is pretty hard to judge, but, for us, it has been well worth it. Despite the surprisingly large numbers of cruise passengers that visit the seventh continent each year (around 37 thousand, although many are on large ships that aren’t able to offer the opportunities to go to land that we enjoyed), we feel remarkably privileged to have been two of them.

We did the basic cruise to the Antarctic Peninsula, sailing on a converted ice-breaker, the m/v Plancius, which takes only 114 passengers at one time. This trip, the shortest on offer, gives you 4 days in Antarctica, with two excursions, mostly to land, per day. Some sites limit the number of visitors, but by being on a smaller vessel, we were all able to do all of the landings if we wanted to.

Boarding a zodiac for our first trip to Antarctic land

We enjoyed a snow-shoe walk up to the top of an island, visits to several penguin colonies, a couple more short hikes up to viewpoints, several trips on zodiacs (inflatables carried on the back of the ship) to appreciate glaciers, icebergs and bird life close up, and, a highlight for us, a visit to Port Lockroy. This is an old UK base now restored in 1950s splendour and run as a rather successful museum by four hardy young Brits who spend the summer season there (with hot showers only when one of the visiting cruise ships invites them on board).

Leopard Seal lazily digests its lunch lying on the ice

Despite visiting the most northerly and nearest point on Antarctica, it still required 2.5 days at sea crossing the infamous Drake passage between South America and Antarctica, to get there. Neither of us are good sailors, particularly not me, but we were well stocked up with sea sickness drugs and were blessed with about as smooth a crossing as you can get on the way out. Nevertheless, the motion of the ocean takes some adjusting too, even with the drugs to stop any symptoms, and the dining room was distinctly quiet for the first day or so. And it was “payback time” on the way back, when we had a more “typical” crossing with Force 7 winds. Nevertheless, I can report that Bruce and I were present for every meal, even the ones where simple plates replaced a buffet and friction fabric replaced tablecloths. We rather made the most of being well fed by someone else for 10 days!  Thankfully, once you get into the shelter of the Peninsula, the seas are calm like lakes and, for us, they were like mill ponds the whole time – beautiful and picturesque. 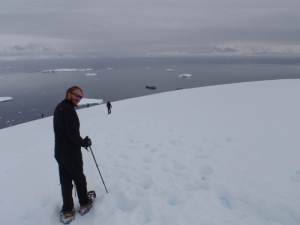 The days on journeys out and return were nicely punctuated by a programme of lectures from the guides, along with processes such as vacuuming our outer garments (to prevent any introduction of foreign plant species for example) and being issued with rubber boots to use for the landings, so, along with regular meals, they passed surprisingly easily. There were 21 different nationalities amongst our fellow passengers, with an age range of 13 to 85, so there was no end of interesting conversation to be found at meal times.

There were a couple of rather unexpected additions to our voyage: The first was a young Indian lady called Bhakti Sharma on board to make an attempt to secure the world record for swimming in the Southern Ocean. On our first day in the Peninsula, she made her attempt and, astonishingly, smashed the existing record by recording an amazing 41 minutes to swim 2.27km in waters of 1°C. How you can stay in waters of that temperature for that long, we will never understand, but she did! The conditions were perfect and she was cheered along by a penguin swimming alongside her at the start, but it did require two guides in zodiacs to watch two Leopard seals asleep on the ice to ensure they didn’t interrupt (not to be messed with) and the Plancius to clear a path through the floating sea ice in front of her! She was in the water for pretty much as long as is safe and was still (sort of) responding when she got out, but she had recovered enough that evening to come up to the dining room and take applause.

Not understanding how someone from Rajasthan, one of the warmest and driest parts of India, finds herself breaking such a record, I asked her and she explained that she is an open water swimmer who took on the challenge to swim in each ocean – and the Southern Ocean was her last. She had trained by having tons of ice poured into the small (just a few metres long) pool of a neighbour each day for a few days, along with lots of meditation. Incredible bravery – and for a great cause; she had used each ocean swim to raise funds to support the fortunes of girls born in her part of India where it is still not unheard of for female newborns to be left out to die. Find out more about her at her Facebook page. Meantime, she says she’s hung her swimming costume up for now…

The other surprise came on the last evening when a Dutch guy travelling on his own, who we had chatted to a few times over dinner, revealed himself to be the CEO of the company we were travelling with, Oceanwide Expeditions, travelling incognito with a semi-true cover story! Our fellow overlanders on the boat, Hannie and JP, a Dutch couple who we had met at the campsite in Ushuaia where we had both left our vehicles, had shared several nice evenings with the (unrecognised) CEO, taking a rare opportunity to speak Dutch again, and, before they had time to think, they had accepted an offer of a good deal on the next cruise. They turned around very quickly the day we returned to Ushuaia to rejoin the ship that afternoon for a further 18 days! It was a fabulous trip, but another 18 days, including 7 more in those seas… not for us. And we’ve got other things to see down here before the summer ends… Time to start heading northwards!

Here is a gallery of images from our visit to the lands in the far south:

These lifeboat pods are supposed to hold 60 people each – let’s hope we don’t need them!

Sailing down the Beagle Channel on a typical grey, overcast evening

Then our first bit of Antarctic land

Some Chinstrap penguins hitching a lift on a piece of ice

Humpback whales spotted near the boat

Trips to land were done by zodiac, boarded from the side of the ship

On our way to land for the first time… 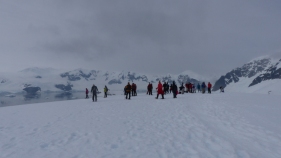 Enjoying the views at the top of the island

View across the bay where the Plancius was anchored

Here was saw our first colony on the Gentoo penguins

Some were still looking after eggs

While others were nursing tiny chicks

They nest on exposed rock, out of the snow, and develop regular routes down to the sea

These are the “penguin highways” 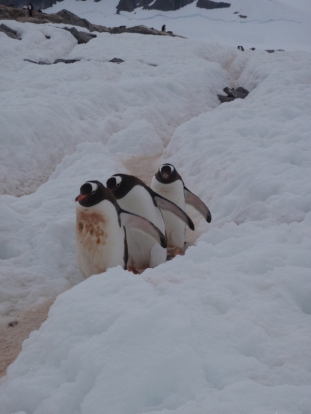 The colonies here were pretty smelly and mucky too, so the first thing they do when they get in the water, is roll around to have a wash

The clouds cleared a little and things brightened up that afternoon…

… for a zodiac trip out

Taking a closer look at a glacier “calving” into the sea

The pictures can’t capture the sounds of cracking and creaking, often sounding more like major explosions, as the ice shifted and broke up as it thawed

The amazing blue hues of the icebergs

A visit to the Argentinian Base Brown

Another colony of Gentoos here too

We could have sat and watched their interactions for hours – sometimes it was like a soap opera!

Penguins are at their best in the water, as they appear to fly under and over the surface

Meanwhile, Plancius was clearing ice in Bhakti’s path for her swim

And one of the expedition team stood watch over a Leopard Seal to make sure it didn’t wake up and interrupt – they are the top predator here and not something you would want to meet while swimming!

Nearby, a harmless Weddell Seal also sleeps of its lunch!

Returning to the boat after an amazing first day

… to use for drinks in the bar that evening.

Dropping anchor ready for another excursion

Climbing another hill, but this time no show shoes required 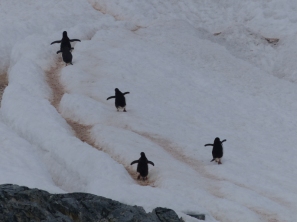 Enjoying the views as we sailed through the Neumayer Channel

A group of Orcas (Killer Whales) is spotted across the bay

Our quiet ship with electric engines could drift in slowly, getting right among them

The male can be easily distinguished by his much longer, tall dorsal fin

It was amazing to get so close to them

Another Crabeater seal lying on the ice

And a Weddell seal, also digesting

The Gentoo chicks were very young when we were there

This one is being fed by its parent

The chicks are very vulnerable to Skuas

These two have managed to grab some dinner 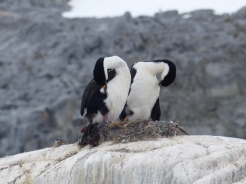 In some places there were Cormorants nesting alongside the penguins, where the rock would have been exposed earliest in the Spring 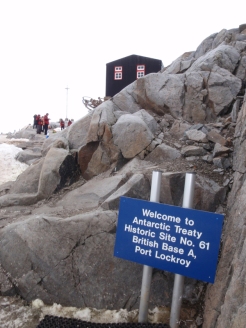 A visit to Port Lockroy, an old British base maintained as a museum

And as a post office for sending cards (via the Falklands) from Antarctica – a popular service! They’ll also put an Antarctica stamp in your passport.

The penguin colony is a more recent addition apparently, with the Gentoo numbers increasing recent year

The chicks were slightly older here

Back at the ship, a Minke whale came over to check us out

It stayed around for quite a while, checking out the zodiacs and trying to play with the kayaks as they were lowered into the water 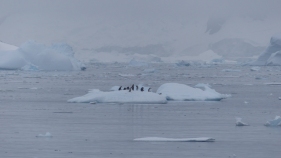 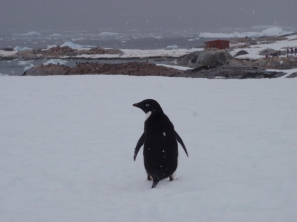 TIme to meet the next species of penguin – the Adelie

A little smaller and cuter than the Gentoo, but these guys moved around much faster

They also had chicks, a little older than the Gentoo

With quite a bit of the “ugly duckling” about them!

A little colder boarding the zodiacs that afternoon, but we always stayed warm enough in our down jackets and hats and scarves 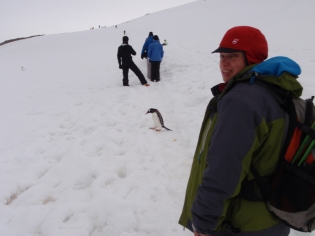 On our last morning, a surprising number of folk took the “polar plunge”!

Our final trip out was on the zodiacs, enjoying sunny spell in the weather

And a final look at a small group of Chinstrap penguins

This species doesn’t breed around here, so these guys would have been males not breeding this year

Getting the zodiacs back on board 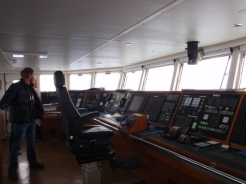 A visit to the bridge

3 responses to “Antarctica: Beyond the end of the world”