Birding from the Yellow Van I: An overview by two complete amateurs

When we arrived in Buenos Aries at the start of our trip, we were very excited to see Monk Parakeets strolling around the lawns. Half an hour, and many photographs, later we had noticed that everyone else was ignoring them because they are so common! That was our introduction to a group of birds (parakeets, parrots and macaws) that we grew to be very fond of over the course of our journey. The sound of a flock of parakeets flying overhead became something of a home comfort to us.

South America may lack the abundance of large mammals that are found on the plains of Africa but certainly makes up for it by the diversity and sheer quantity of birds. From the penguins and Red-legged Cormorants in the south and the stunning abundance of seabirds following the rich Humboldt Current in the west to the extraordinary biodiversity in the wetlands, jungles and cloud forests, the region has it all.

Lots of Cormorants off the south coast of Peru

Imperial Cormorant on the east coast of Argentina

This blog is split in two parts, the first giving an overview and a taste of our birding experiences throughout the trip, whilst the second blog is a more detailed record for ourselves and for those readers who like lots of pictures of birds. It is split into several themes around places we visited. 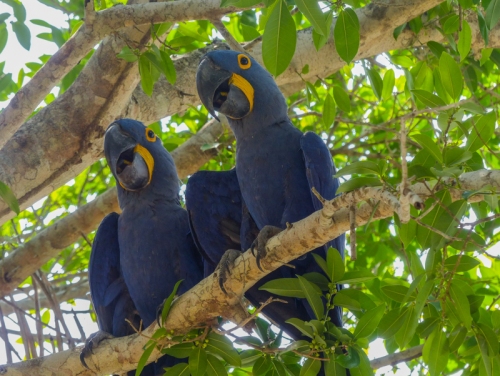 A pair of Hyacinth Macaws ask us to turn the heat down in the Pantanal, Brazil

Birding under your own steam

Practically, there are two approaches to birding – trying to spot things on your own or taking advantage of a guide. As far as I understand, serious birders will use guides rarely but then they have the experience to be able to tell a Brown Skua from a South Polar Skua… 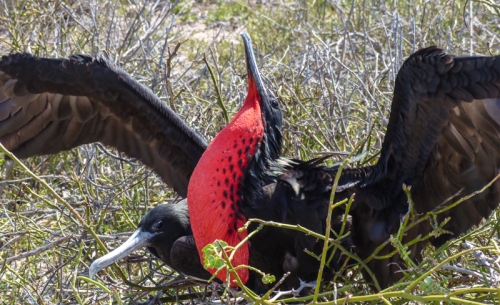 A Great(?) Frigate bird has successfully found a mate in the Galapagos 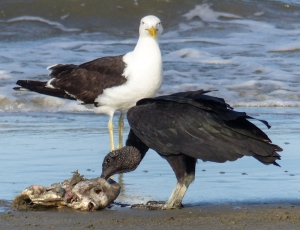 Black Vultures are found throughout South America, this one was on a beach in Brazil

Initially most of our encounters were birds we spotted from the van whilst driving or camping, or walking around. We are not serious birders, so this worked well for new places – most of common birds were ones we hadn’t seen before. It was a good way to start and get our eye in and we soon became familiar with some of the staples of South America such as the different vultures, the Rufous-collared Sparrow (which we fondly nicknamed the punk sparrow) and the ubiquitous Southern Lapwing.

With a range throughout most of South America, we came across many Southern Lapwings

It was difficult capturing hummingbirds in the wild away from feeder. Here is a Juan Fernández Firecrown, which is only found on Robinson Crusoe Island, Chile

We did see some rarer birds this way and our sightings of the iconic Andean Condor were always special, as was the time we unexpectedly came across a male Andean Cock-of-the-rock, with a pair of females. The occasional spotting of a hummingbird that didn’t involve a feeder was something Becca particularly enjoyed.

We did try to stop this Social (?) Flycatcher from attacking itself by closing our wing mirror! 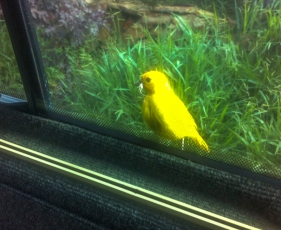 Another yellow bird confused by the yellow van – an Orange-fronted Yellow Finch tried to give us some nesting material in Colombia. The windows are blackened so it couldn’t see us!

Sometimes you need to know where to go to see something and occasionally an organised trip will be required to get there. We did a few of those and it was the only way to see several species of penguins (Rockhoppers off Argentina; Adélies, Chinstraps and Gentoos in Antarctica) and the endemics of Galapagos. We found these trips well worth doing, despite the expense.

We needed to do a boat trip from Puerto Deseado, Argentina to see the delightful Rockhopper Penguins… 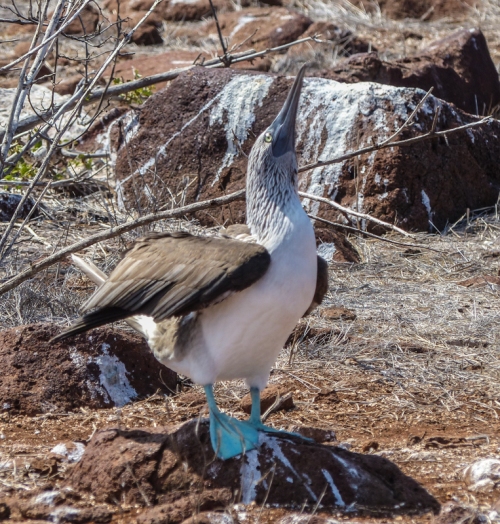 …whilst displaying Blue-footed Boobys are best found in the Galapagos

With (a lot of) help from professional guides

The smallest of the hummingbirds – a Bee Hummingbird in Cuba

For complete amateurs such as ourselves, it was always a treat to do a morning with a professional guide. The ones we used were recommended locals who knew the area well and are able to spot the smaller, less brightly coloured birds that I always found difficult to spot and identify, especially with my non-passerine (ie. not the songbirds) guidebook being in Spanish! There is no way we would have seen a nightjar sleeping in the daytime (my first ever) without a guide. I’m also terrible at identifying hawks and eagles in the air, which is where I really appreciate expert knowledge.

To end part I, here is a gallery of some of our favourite memories:

What are you doing here?

…to find that she had a family!

We saw lots of Gentoo Penguins

A Black-necked Swan in Patagonia

James’s Flamingos at over 4,000m altitude in Boliva

This White-bellied Hummingbird was a resident at our hostal in Sucre, Bolivia

A young(?) Guira Cuckoo has a treat that the adult wants…

…but it managed to keep it for itself

Our first sighting of an Anhinga in the Pantanal

Toco Toucans can eat eggs and chicks so are not liked by other birds. Here a couple of Kiskadees are chasing one away from their nest

A Wood Stork thinks its a cormorant…

This Cocoi Heron seems to find lunch a bit of a shock!

We saw lots of Andean Woodpeckers in the Altiplano

Andean Condors are always a sight to behold

You’re in my way!

A male Blue-footed Booby showing off to a female 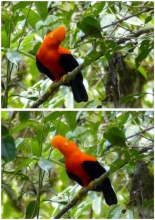 We came across this male Cock-of-the-rock in Peru… 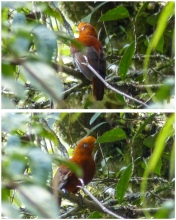 …along with an accompanying female

2 responses to “Birding from the Yellow Van I: An overview by two complete amateurs”