Picking the van up from Hastings

While preparing for the trip, and since arriving in South America, we’ve had a number of questions about our van: why did we ship a vehicle for our trip out from the UK rather than get one out here; why a van; what have we done to prepare it for the trip etc.? So this post is a description of how we sourced and prepared the Yellow Van and the subsequent one is about fitting it out ready.

The process began Christmas 2013 (about a year ago now) with some long winter hours spent on the internet researching. We wanted to start our trip the following autumn, which meant we weren’t giving ourselves as much time as would be ideal, but such projects tend to take as long as you give them anyway… We already knew that we wanted to do a driving / “overland” trip, as this is what we had talked about for many years, typically late at night over a wee dram. We have always enjoyed driving holidays and trips (albeit just for a few weeks at a time) and we like the freedom that having your own vehicle brings, allowing you to get to the places buses don’t go (such as the more remote rock climbing locations) and to stop and start as you choose. So that decision came before deciding the destination, but we did need to work out the logistics of how to do such a trip around Latin America from the UK.

We looked (briefly) into buying something when we got out here, but that can be complicated (legal and bureaucratic complications for foreigners buying a vehicle that vary between countries), with no certainty of finding a suitable vehicle. For example, the secondhand market is less developed over here and we read about one couple who gave up looking for a vehicle in Chile and flew to the US to find one and ship it out. After that, we would then have the challenge of preparing it in a foreign country where we didn’t speak the language.

An alternative option would be to buy a vehicle from other overlanders when they are finishing their trip. We have come across people who have done exactly that, which seems to work well (although can have some legal complications), but the timings are unpredictable and we didn’t come across suitable vehicles when we were looking.

Somewhat pleasingly, when we looked at the option of shipping a vehicle out from the UK, it looked surprisingly do-able and, in the context of a long-term trip, not particularly expensive. Plus that would mean we could source and prepare our vehicle for the trip whilst we were both still working and earning, helping to pay for it, rather than spending “trip time” on preparation.

So the next question was what vehicle… We wanted to be able to sleep in it and not have to pitch a tent each night, as we had done on some of our driving holidays in the past. This also gives more freedom about where you can park for the night – for example, it’s common to park on petrol station forecourts overnight in Latin America. We had seen some great self-completed van conversions over the years, usually by outdoor enthusiasts or surfers, and that was our inspiration. We also found that there were many people using converted small vans for long-term overland trips like ours, so that’s the way we decided to go.

But not just any old panel van. Ideally we wanted:

Our first choice was a Toyota HiAce, because Toyota is ubiquitous across the globe and the HiAce has the same engine as the Hilux pick-up, which is also ubiquitous. The 4×4 HiAces are great little vans – as we had seen when travelling in Kenya, where they are used for everything and bounced over the mud passing us by when we were stuck in our safari Land Cruiser! But there are very few left on the market in Europe now and the few that are that we saw were very old and rusty – not a great base vehicle. We also thought about Mercedes, because it is also a ubiquitous brand, but the older Vitos rusted quickly, the 4wd is extremely rare and the shape is not so adaptable for conversion to a camper. A commonly used alternative, the Sprinter, was too big for us.

Having followed some excellent websites for second hand vehicle sales in Europe (particularly Germany) for a few weeks, it quickly became clear that the VW T4 was really the only viable option – there were a few with the “syncro” (4wd) system coming and going on the market of a suitable age and condition.

We were warned to be careful about buying LHD vans in the UK that have come from Europe unless we knew their history. Some come on the market after a hard life bringing people here from Eastern Europe, and, indeed, we did come across a few that seemed to match that description. But in the end, we were pretty lucky – a French van brought over to the UK by a returning Brit popped up on Gumtree – and matching our spec: 2.5L Turbodiesel, syncro (4wd), air con, well maintained (at least for the last 8 years, before which it was a minibus taking kids into the mountains apparently) AND, even better, it was long wheel base, which is less common, but gave us an extra 40cm of van to play with. The only concerns we had were high mileage, not for its age perhaps, but higher than ideal as a starting point for us at 200k miles (300k kms) and what looked like some rust on the body. However, we reassured ourselves that well looked after diesel engines go for a lot longer than this and that we would be wanting to do a lot of work to upgrade and renew parts such as suspension and brakes before we went anyway. 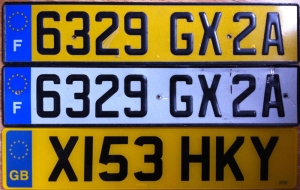 We took ownership of the van (which was white at the time) on the 16th March and, after a tense few hours trying to get insurance for a foreign registered van in the UK (credit to Adrian Flux, specialist insurers), drove it straight to a garage next door to Bruce’s parents to complete an MOT (as new owners of a foreign vehicle, that is the only journey we were legally allowed to do until it is registered in the UK). Their car park is on private land, giving us somewhere to legally park the van for the four weeks it then took to complete the UK registration process. 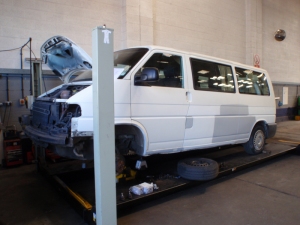 Next stop, at the end of April, was a bodyshop to get the van stripped, rust treated and repainted. As it turned out, the rust patch wasn’t rust at all, but a badly filled dent, and, as they don’t use salt on the roads in France, it was actually in pretty good shape for its 14 years, so we perhaps didn’t really need to do this step at all. But now we know we have a rust-free body, which may help with resale, should we decide to sell at the end of the trip. Meanwhile, it had also made its first trip to the mechanic, next door to the bodyshop, for a first look over and work done to the steering system and brakes. 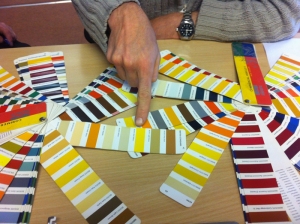 And why yellow? We decided we didn’t want to be just a white van, if we had the option, but it needed to be a colour that was light (in the heat) and not one that could look in any way military (green, grey etc.). We wanted something fun, bright and visible, to help with safety on the roads, although we are aware that it makes it harder to hide if we park for the night in the bush, but in reality, the former trumps the later. Since we’ve been out here, we’ve found that very few cars have much colour and we’ve only seen one or two yellow cars at all – but we share a colour with bank security vans and school buses – no bad thing perhaps!

So, at the start of June, we had a refurbished shell ready for converting into our home on the road…. 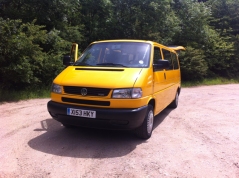 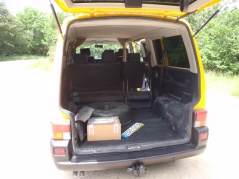 Tagged as About, Preparation, Van

3 responses to “About the Yellow Van part 1: Sourcing & Preparing”