Flying out over Sugarloaf, Rio

September & October 2015: Whilst Brasilia has been Brazil’s official capital city since the 1960s, Rio de Janeiro is still the country’s heart, beating to a uniquely Brazilian rhythm. We flew into Rio in mid-September, using it as a hopping off point for a return trip to the UK. We stayed for 2 wet days on the way out, then enjoyed 10 glorious days on our return from the UK in October, before flying into Brasilia for a one night stopover on route back to the van in Campo Grande to continue our exploration of the Pantanal.

Rio de Janeiro – there can’t be many city names that carry so much romance, excitement and expectation in their names and we were really excited to have engineered an opportunity to visit. But Rio teased us. For our first, brief visit on the way back to the UK, the weather was miserable. On 12 September 2015, we flew into the small, dramatic domestic Santos Dumont airport right in the centre of the city, built on a tiny peninsula in the bay, having carefully booked seats to give us the best view from the plane, but all we saw was cloud! We didn’t even see the famous statue of Christ the Redeemer standing over the city until on the way to the airport to leave a couple of days later!

We tried to make the most of it by staying right in the centre, handy for museums and art galleries. The National History Museum gave us the full story of the country in a compelling and well-illustrated way. Since the capital moved to Brasilia, many of the old buildings vacated in Rio’s centre by the likes of the national bank and the national Post Office have been turned into cultural centres, making for an interesting wet Sunday’s exploration.

Reclaimed windows and doors on the outside, mirrors on the inside

The next day we headed up Santa Theresa, an old-fashioned, artistic barrio up on the hill above the centre. Unfortunately, just as we arrived, the famous tram to and from the centre to Santa Theresa stopped running due to an electrical issue, but we did see one crossing the famous “arches”. These elegant arches are in fact an aqueduct built in the mid C18th to bring fresh water to the city, onto which the tram line was added at the end of the C19th.

Apparently the trams can still go downhill despite the power supply issues! 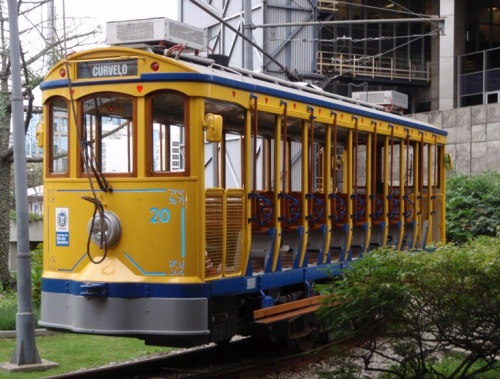 One of the restored trams close up

On foot to Santa Theresa instead

So, we climbed the stairs up the hill. And not just any stairs, but the stairway decorated by the artist Jorge Selarón. It started as a project to brighten up the street outside his door, but took over and became his life’s work. He incorporated tiles from all over the world. 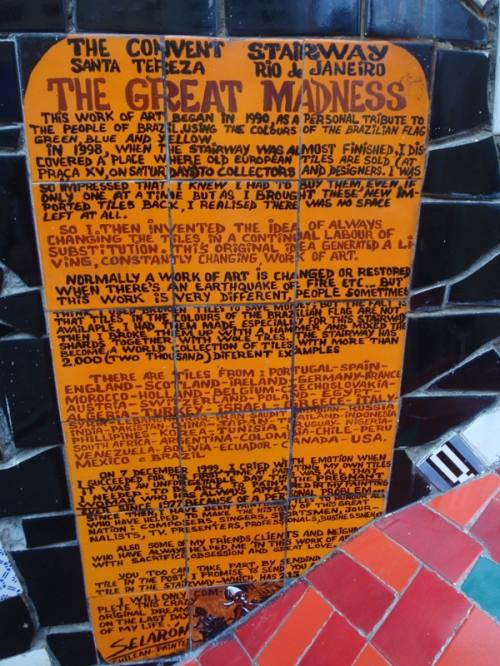 He became known for his sketch of a pregnant woman – a person he felt guilty about apparently!

The lovely barrio of Santa Theresa 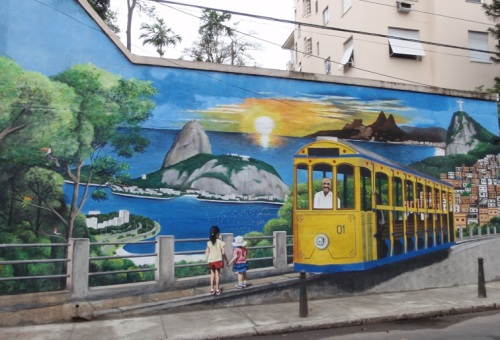 In celebration of the popular, but regularly threatened, tram

Maybe we’ll see the top of Sugarloag when we come back?

On our return, three weeks later in October, Rio provided weather that gave us more of our hoped for Rio experience. We stayed in a small but perfectly formed rental apartment a few blocks back from Ipanema beach and enjoyed strolling the beach front and sitting at a beachside bar for sunset Caipirinhas.

We combined a trip up the cable car to the top of Sugarloaf (finally it was out of cloud!) with a walk back to Ipanema along the full length of the famous Copacabana beach. 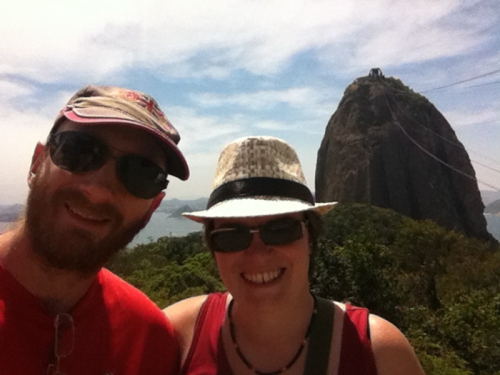 Enjoying the good weather with a trip up Sugarloaf 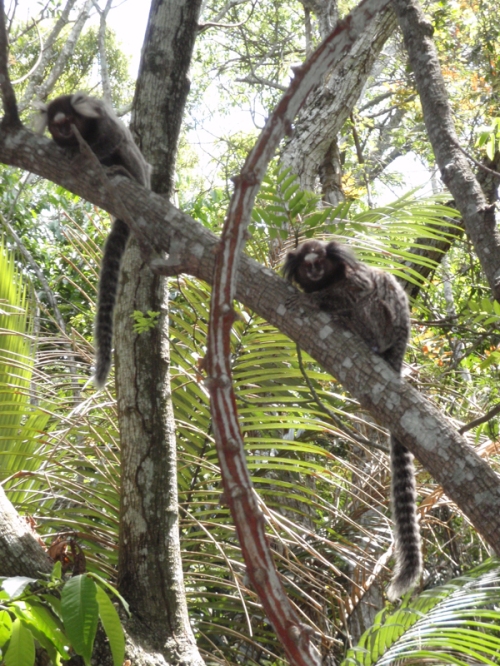 Pausing to look at Marmosets in a more natural environment (and get bitten by mossies!) 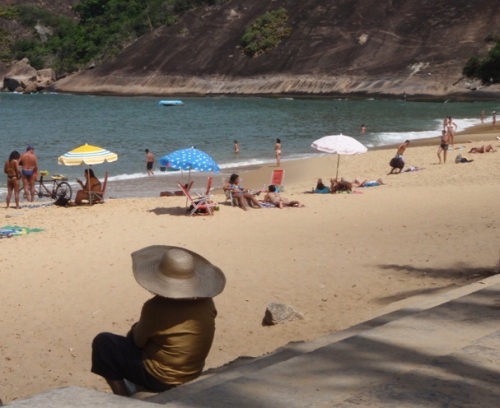 And along Copacabama beach front

Part of the magic of Rio is the setting, around a lush, tropical bay with dramatic hills and rocks, forcing the city to fit into the valleys and bays between the hills. Before we arrived, we had wondered whether this geography might make it hard to get around, but buses criss-cross in every direction imaginable, taxis are cheap and easy to find, plus the metro joins Ipanema to the centre.

The city fits between and around tropical hills

We took the spectacular little narrow gauge cog driven train up to the base of the Christo Retentor statue at the top of Corcovado hill, a steep climb through the forest. When we got to the foot of the statue, we were almost overwhelmed by the pack of the crowds, but the views were worth patiently working our way around. Up close, the statue itself is much more delicate and elegant than we had realised, built in an art deco style finished in a tile mosaic. Tile mosaic surfaces feature all over the city, especially the pavements alongside the beaches, with a different mosaic design for each beach and neighbourhood. 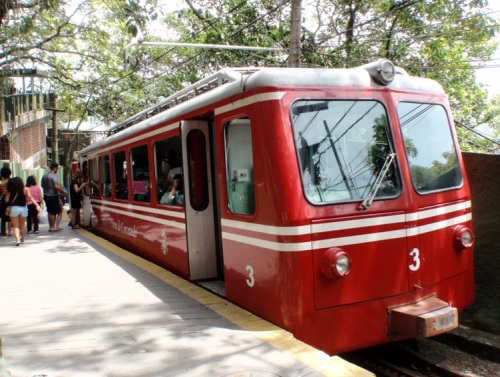 The small but powerful cog train up Corcovado hill 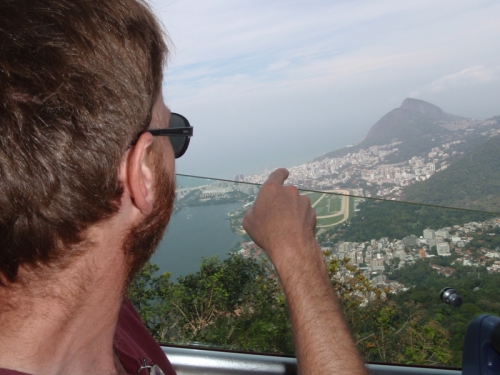 View from the train

Crazy crowds at the foot of the Christo Redentor statue

The elegant statue was worth a closer look

Rio’s favelas are informal neighbourhoods that have grown up over more than 100 years outside of the standard city governance systems and structures. They grew up the steep unwanted hillsides of the city, the prime land being the flat land in the valley bottoms. Today, formal rich neighbourhoods sit right next to informal favelas, squeezed in between steep hill tops, in the city’s own mosaic mix.

The Favelas climb up the sides of, sometimes, unfeasibly steep hillsides

The first Favela came about in the late C19th when some soldiers returning from a conflict in the Eastern provinces were left with nowhere to live. They set about building their own homes on an empty hillside and named it Favela after a place where they had been serving in the army (itself named after a skin-irritating plant, but maybe they didn’t realise that!) Over the years since then, Rio’s Favelas have expanded as people built houses and arranged services amongst themselves as best they could, but many of them became dominated by gangs. More recently, they have been brought one by one into the normal city systems, with special teams of police being sent in to “pacify” them and services, such as sewage systems, rubbish collection, etc. starting to be provided. Some people who have lived for generations in old Favela’s, now with formal property ownership systems introduced, find themselves in the strange situation of sitting on potentially prime retail estate, with magnificent views over the city and its coasts. There have been several high profile court cases to settle resulting ownership disputes! 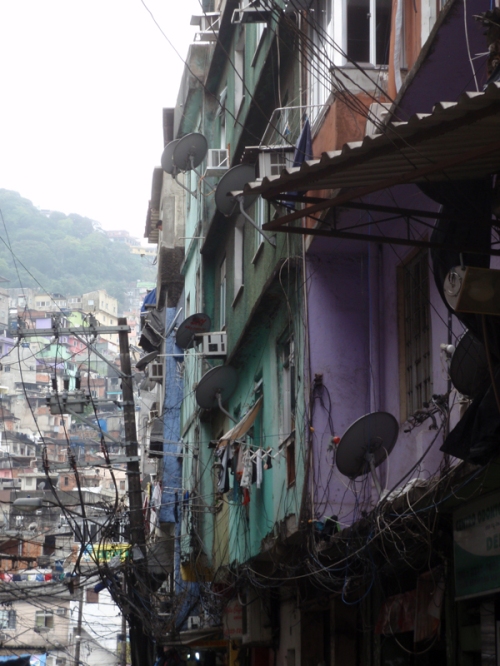 Now being brought into the city proper, with a lick of paint and distribution of services (such as clean water, via blue tanks on the roofs)

But there’s not much to do to change the tight fitting architecture!

But life in Rio revolves around the beach – the centre of social activity. Everybody, rich and poor, comes together at the beach.

Busy weekend day at the beach

Rio is also all about music, dance and partying. A highlight for us was Bip Bip bar in Copacabana, where musicians gather informally around a table in the tiny bar each evening and improvise together, with punters standing along the edge and gathering on the pavement outside to listen. Owner Alfredo has held the fort for over 40 years, sitting at a table keeping tabs on how many beers each person drinks and telling off anyone who’s making too much noise.

On Saturday night, we headed into the centre for a night at the more famous Scenarium, an eclectic live music club spread over three levels, to experience some of the famous Rio music and dance spirit. 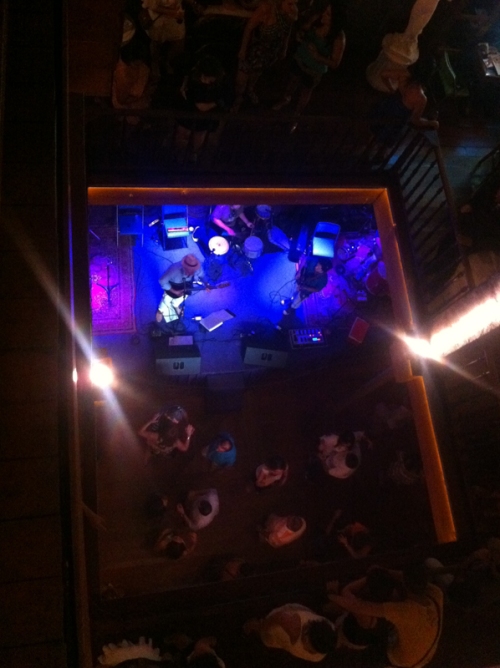 Looking down from the top floor onto the stage at multi-levelled, eccentric Scenarium 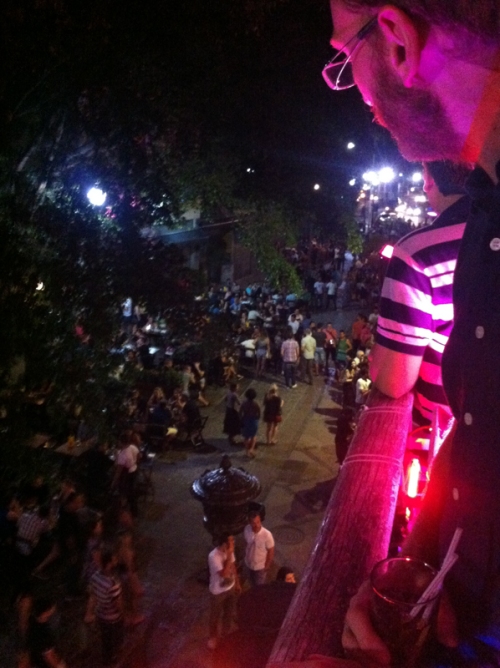 And onto the lively street outside

We loved our time in Rio – we enjoyed the diversity and mix of peoples, the relaxed live and let live (and enjoy it!) attitude, the beautiful setting, the crazy geography and everyone living on top of each other, sometimes literally, but somehow getting along. We somehow felt more alive for our time living in the middle of it all.

A gallery of a few more pictures from Rio is below. Scroll down further to read about Brazil’s official capital, Brasilia.

Wet Sunday looking over the bay in Rio 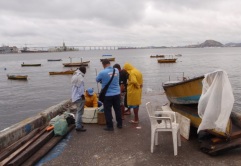 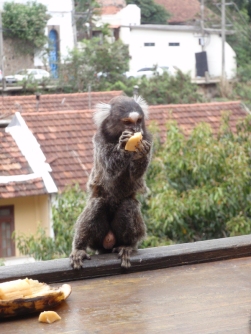 Marmosets being fed on the balcony of a restaurant 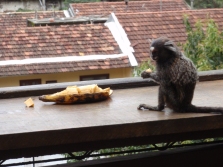 And nimbly climbing through the cables

How did such a large cat get up there?

Plane coming into Santo Dumont on a nicer day

Let’s get this party started! 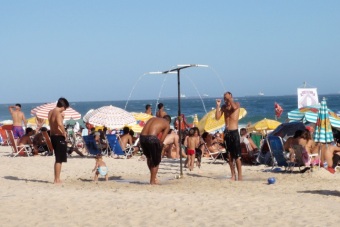 Sunset behind “the brothers”

Some Brazilians we spoke to expressed some surprise that we were going to visit Brasilia, “Well, Brasilia’s Brasilia I suppose,” said a man we chatted to briefly at the airport. But Brasilia has a fascination… It was built from nothing in the 1950s to fulfil an idealist vision to put the seat of government in the country’s centre (it’s “empty centre” no less) and try to create some balance by drawing some focus away from its coastal cities of Rio de Janeiro and Sâo Paulo. The fascinating buildings are all the work of one architect, Oscar Niemeyer. We spent about a day there, taking a look at the idealistic city, making an overnight stop on 13th October, 2015.

Looking down through the heart of Brasilia, along Exio Monumental, through the Esplanada dos Ministérios (ministry buildings on either side), towards the main seat of government

Eixo Monumental lit up at night

Moving Brazil’s capital from Rio was first discussed in the mid- to late- C19th and was included in the constitution of 1891, but it was the election of President Kubitscheck in 1956 that started the process after he included it as a campaign promise. Amazingly, the layout and all the main buildings were built in 41 months, with the city being inaugurated in April 1960, when the process of moving the government to the city began. 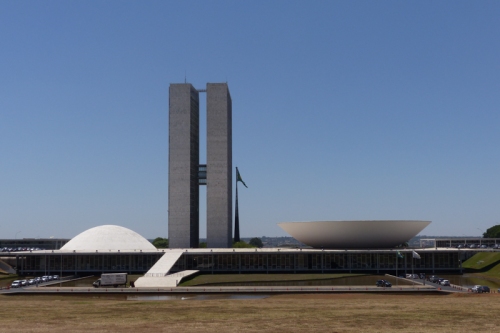 The National Congress buildings, with domed Senate building on the left, the Parliament office tower in the center, and the bowl-shaped Chamber of the Deputies on the right

The Supreme Court – complete with a threatening cane!

The Plaza of “three powers” (legislative, executive and judiciary) behind the Congress

Some more pictures of the amazing collection of 60s modernist, idealist buildings we saw in our brief visit are in this gallery. Despite the era of construction, we were surprised by how striking and age-less the buildings appear today – perhaps it is the clarity of the white against the blue skies, or the use of open spaces, but they still feel futuristic over 50 years later.

The Memorial to Kubitschek

In contrast, you walk up a ramp to enter the National Museum

The striking space inside is now a cultural centre

The interior of the Sanctuary

The Palace of Justice (mirroring the Itamarty Palace opposite) 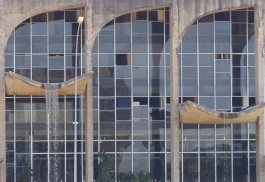 Complete with fountains emerging from the glass walls 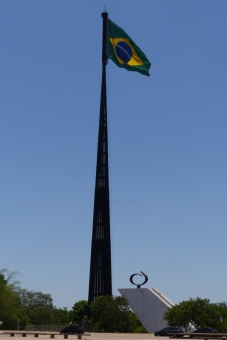 The Museum of the Foundation