¡Pesadilla! Woes with the Yellow Van

The port of Montevideo

The Cap San Nicolas, with the Yellow Van on board, tightly strapped inside a container, arrived on time in the port of Montevideo on Friday 7th November and then began 10 days or so of mixed fortunes with the Yellow Van at the start of our road trip proper. 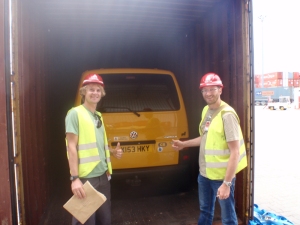 Bruce and George just after opening the container

Thanks to our Agent in MV, it was a petty quick and efficient process to retrieve the van from its shipping container and bring it into the country, but an expensive one – in the end it cost us more than $2,400 in charges and fees for receiving the container, storing it, cleaning it, unloading it and clearing customs, almost twice as much as we paid for the shipping itself (half of a container shared with George and Irene of LaSuperVanita). Although container shipping had the added advantage of being completely secure – worth the cost for us, with all our kit stowed in the van for the journey. Our agent worked with his customs agent to prepare our paperwork and the following Wednesday, Bruce and George (the named owners of the two vans in the container) were taken to the port to open the container and complete the final customs inspection and temporary importation paperwork.

All seemed fine at first. The container was open and the vans were there intact, but when Bruce came to start the engine, it was dead – just an empty clunk when he turned the key. So the Yellow Van was inelegantly pushed out of the container and, having checked that the battery was ok (which is was, fully charged), the van had to be given a pull by a fork-lift truck to start it. The engine was turned off again when they went through the reception to return hard hats and, this time, a push start from a group of guys was needed. Unfortunately, the problem hadn’t miraculously disappeared as Bruce had hoped!

Next stop was the customs offices for the final paperwork and this time the van was left running whilst the paper work was completed and Bruce called me. I was waiting at the hostel and, armed with the telephone number of VW in Uruguay, Irene, one of our container buddies, who is Spanish, made some calls to let a garage know we were coming. Clearly, Bruce didn’t want to turn the engine off without having a way to start it again (not with out a group effort anyway), so he pulled up outside the hostel and I hopped in and the Yellow Van’s first stop in Uruguay was a VW garage in Montevideo.

We were fortunate that some of the staff there spoke some English (we tried, but our Spanish isn’t yet up to this sort of challenge!). We hoped it might just be the solenoid stuck after 4 weeks stuck in a container at sea, but by mid-afternoon the following day, we had been told that it was more than that and they were sending the motor off to be cleaned and reconditioned with new bruahes. Another day, with bags packed ready to move into the van, waiting in the hostel in MV…

Finally, on Friday afternoon, we left the hostel and piled our stuff into a taxi and headed to the VW garage to get the van. They nearly didn’t let us take it because of the air-bag warning light that has been on for months. That came on when Bruce fitted the cruise control – a result of reconnecting the battery to switch the cruise control on before refitting the removed airbag and steering wheel. No way to turn the warning light off again, but none of the garages we visited in the UK seemed to mind, but the Uruguayan one was most perturbed! But they don’t have T4s with their well-known warning light issues… 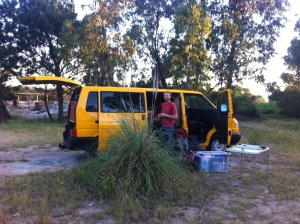 Parked up for our first night in the van in S. Am.

So we finally hit the road to drive along the coast at about 6.30pm Friday evening and headed to a campsite 38kms up the coast. The next day, we busied ourselves with unpacking and sorting kit in the van, then visiting a supermarket and, as we hit to road to drive a little further along the coast road, we were feeling rather proud of ourselves for having managing to navigate the process of buying a gas canister (to use with our triumphantly sourced and purchased gas rings and regulator earlier in MV), and even succeeding in getting it filled at a gas canister filling station, armed with a little list of relevant vocabulary. 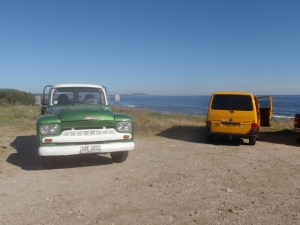 Bruce had given a talk on his work in Oxford at Montevideo University the previous Monday and we had been taken out for lunch by his host there and some of his research group. His host suggested we call in on an old friend of his just up the coast in Piriapolis, a lovely resort town, who is a keen traveller herself and wanted to meet us and see the van. So that was how it came to be that, at 6pm on day 1 on the road, we were parked in a beachside carpark waiting to meet her. She arrived on a little moped with her daughter ready to lead us to her house nearby for a coffee, but as we came to pull out of the carpark, the gearstick was completely floppy and it wasn’t possible to put the engine of the Yellow Van in gear. 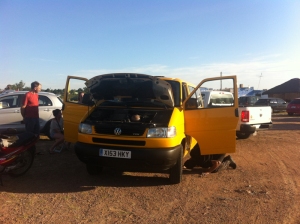 Although this is clearly pretty bad luck, another breakdown 24 hours after we picked the van up from the garage in MV, it couldn’t have happened at a more fortuitous time for us really. Silvia simply picked her phone and called a local mechanic for us and we waited sat in the shade of the van trying to speak in Spanish, but relying on Silvia and her daughter Lucia’s English to really communicate! The mechanic found the problem, a broken piece connecting the gear stick with the engine, and was able to reconnect it just enough for us to limp along in low gears behind him to his garage, where we left the van for him to work on.

Silvia and Lucia – our lovely generous hosts in Piriapolis

Meanwhile, Sylvia had very kindly invited us to stay with her in her spare room, so, once we had hastily packed some bags, she came and picked us up and took us to her lovely little house. We had 2 days with her and her daughter and son, Santiago, making us try to speak Spanish, but also letting us resort to some English when we needed to, enjoying true Uruguayan hospitality (which, typically, involves eating dinner at about 11pm and going to bed in the early hours). They even made sure we tried the ubiquitous maté! No Uruguayan is a complete person without maté cup and accompanying thermos of hot water…

Then, on Tuesday morning, as promised, when we woke up, we were welcomed by the news that the van was fixed and was on its way round to us. The mechanic had got a replacement part locally machined the day before and it was a simple repair in the end to fit it. This was a great outcome, as the part isn’t available here and it could have taken weeks and considerably more cost to source and import the part from Europe. Thank goodness for local ingenuity, old school style!

So, finally, on Tuesday 19th November, we were on the road proper, trying not to think about the saying that problems coming in threes – we’re scientists after all, so surely we’re not superstitious!?

Some pictures of Piriapolis (not a gallery this time)… 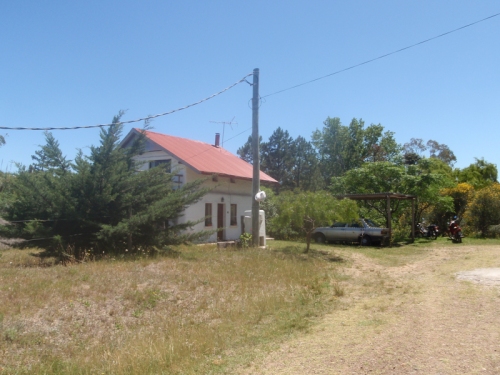 Our lovely home for a few days of enforced R&R by the beach – it could have been a lot worse! 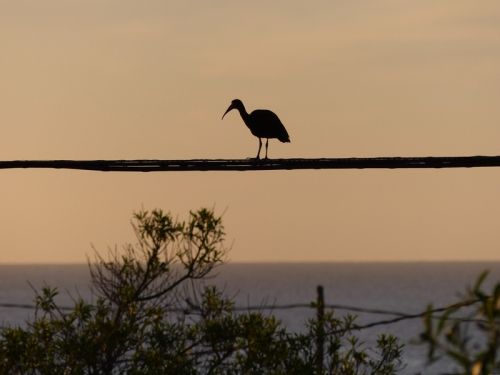 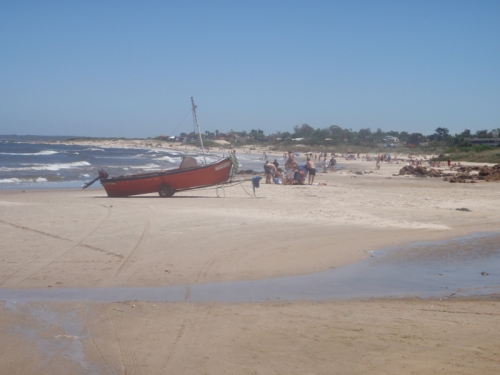 The Spanish study continues – audio lessons at the beach

2 responses to “¡Pesadilla! Woes with the Yellow Van”