Buying blue (and other) potatoes on Chiloe

On our route north to Santiago we a zig-zaged, to and fro across the Andes, between Argentina and Chile. The Argentinian sections are in the accompanying blog here. Our Chilean journey started with the wild Carretera Austral in far south. We then detoured back east into Argentina, before a final leg back in Chile from the largest island in South America, passing (and narrowly missing) active volcanoes all the way up to Santiago.
Bruce here… 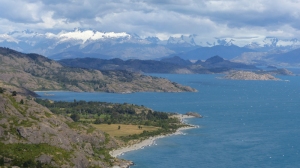 The Carretera Austral (Chilean “Ruta 7”, 1,240km long) goes all the way from Villa O’Higgins in the far south, just north of Los Glacieres national park, to Puerto Montt. The road was constructed in the Pinochet era to connect the south to the rest of Chile. It is mostly “ripio” (gravelled) but much of it is currently being paved, which certainly makes the driving a lot easier but some would argue less interesting. It may start at Villa O’Higgins but arriving from the south, Villa O’Higgins can only be approached by small ferries taking foot (or bicycle) passengers. 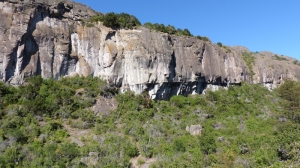 Site of the Cave of Hands at Villa Cerro Castillo

For those overlanders driving north, the first place you can pick up the Carretera Austral is coming from the border crossing at Los Antiguos (the cherry mecca of Argentina) to Chile Chico and this is indeed where we returned to Chile. The route winds around lakes and fjords, through beautiful scenery and greater diversity of fauna and flora as you go north. The driving on the “ripio” roads can be quite slow and being to the west of the Andes, rain was something we began to encounter more regularly. The road is interspersed with small villages and towns, where most of the population live. Indeed one town, Villa Cerro Castillo, was only really established in the 1960s when the locals got together to build a school so that they wouldn’t have to send their children away anymore, with the town becoming established around the school. This orginal school has recently been renovated and is now an interesting little museum that also includes access to the local “Cave of Hands”. This one is on a much smaller scale than the UNESCO site in Argentina but, without fences, you can get right up close to the paintings. 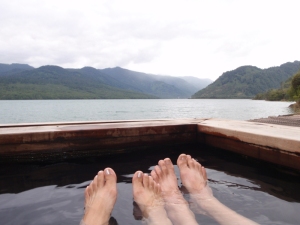 Our first thermal springs on the shores near Puyuhuapi

The Carretera Austral may travel through a very remote part of Chile, with few vehicles driving up and down, it but it is actually one of the most popular cycling routes in the world. It is also popular with Chilean students in the summer, who hitch-hike the length of it. We coincided with the end of the summer holidays and there seemed to be more hitch-hikers than potential lifts! This means that they have to be very patient, have some reserves of food with them and be prepared to camp the night by the road! Even though we don’t have any seats in the back, we did our bit in a small way giving a couple of lifts to those who were happy just to lounge in the back on the bed, extracting names of interesting Chilean music to listen to in return (as well as a share of mate, although it is not so widely drunk in Chile). A further highlight on the road was a meal (simple but extremely tasty) at the only restaurant open in Puyuhaupi, where we also had our first encounter with the thermal springs that are a feature of this side of the Andes.

The end of this section of the road for us was to be Chaiten, from where we could get a ferry to the island of Chiloe, before heading north. Realising that autumn was catching up with us and a deterioration in the weather might limit our opportunity to appreciate some (more) of the best trekking the southern Andes has to offer, which is on the Argentinian side, we cancelled our ferry ticket and backtracked to take a sharp right and head east again, back across the border into Argentina for about a month before coming back into Southern Chile to complete the journey north.. 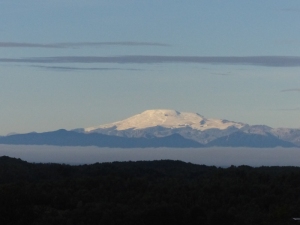 One of the mainland volcanoes seen from Chiloe

Whilst we had clearly seen our first major volcanoes from our trekking in Frey (Mount Tronador was the closest), the drive through the border to Chile should have been quite spectacular, taking us the closest yet to volcanoes. I’m sure it is as you drive through an area that has relatively recently seen an eruption, but when we were there, there was a lot of rain for a couple of days and little to see except cloud. This was fine for sitting in a thermal pool but not so good for views! Over time, we started to find a pattern to the weather, with a couple of days of cloud and rain broken up by glorious day to give us a glimpse of the spectacular views before the weather set in again. A bit like being on the west coast of the UK! 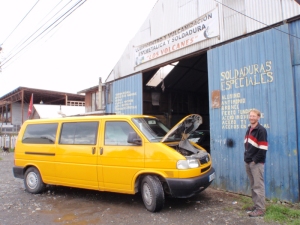 Patching up the exhaust

Putting the rather disturbing loud noise that had developed when we drove down to many, several large, holes in the exhaust, the first thing we did when we got into Chile was to get the exhaust patched up by a bit of welding to get us through the week we had planned on the island of Chiloe. This done, we boarded the ferry and went to the island. It was a last stronghold for the Mapuche, who held out against the Spanish conquistadors far longer than everywhere else. The island are known for having many different varieties of potatoes and a good variety of seafood, as well as for their churches built in a local style with tiles of wood, originally using the Alerce trees. On the island, there are three major towns and a large proportion of it is national park. The west coast is pounded by the Pacific Ocean, whilst from the east on a good day you can see a number of impressive volcanoes on the mainland amongst the Andes. It was a place that we hadn’t originally planned on visiting, but are very glad that we did.

The real culprit was the wheel bearing…

On leaving Chiloe, we went to Puerto Montt to get our still noisy exhaust sorted out properly. This was achieved by most of the pipe (apart from the mufflers) being replaced and so we then set off north. However, the van was still making a huge racket when we drove over 50km/h, which was not a good sign seeing as we had over 1,000km to go to get to Santiago. We thought it might be a wheel bearing and so returned to our friendly exhaust mechanic, who in turn recommended another mechanic in Puerto Montt. It was indeed a worn wheel bearing and thankfully no further damage had been done, despite our driving on it thinking the noise was exhaust, for some time. During the couple of unexpected days in the town, which doesn’t have a lot to offer the tourist, we focused on food and drink experiences, finding a café dedicated to Sherlock Holmes (which Becca enjoyed), and a rugby themed bar that had a corner devoted to the local climbing club (which ticked my boxes)! We also took the opportunity to further enjoy the sea food.

A forest of monkey puzzle trees

Once the van had been sorted out, we then moved on, albeit with a few days fewer than we had intended for the rest of our journey to Santiago. Stopping in Puerto Varras for lunch (and to try and see views of Volcáns Osorno and Calbuco), we couldn’t have known that, just a few days later, Volcán Calbuco would erupt spectacularly. Our drive north included a night at Villarrica, where we had breakfast at the foot of the volcano which had experienced a small eruption a few weeks earlier, and a couple of days in Parque Nacional Congruillo, with amazing forests of monkey puzzle trees around Volcán Llaima, which last erupted in 2009.

By now, our deadline to get to Santiago and receive equipment being sent out from Oxford for our field trip to Robinson Crusoe island was approaching, so hit the “Ruta 5” and headed north…

A gallery of more pictures from our exploration of southern Chile: 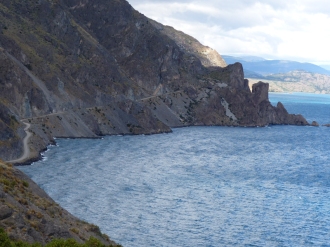 There were many shrines along the roadside…

… including some with plastic bottles as offerings!

A beautiful view at our overnight spot near Villa Cerro Castillo

The valley of Villa Cerro Castillo

The paintings in the Cave of Hands

We gave some student hitch hikers a lift back to town after a walk, but, for a particularly steep bit of road, all the passengers, including Becca, had to get out and walk!

Our first steep road up to a pass in the mountains 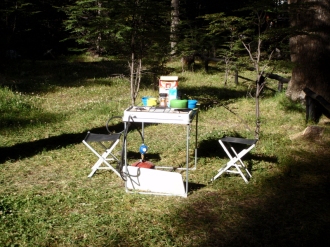 It was noticeably cooler and damper and we started chasing spots in the sun when we camped – this was a breakfast sun spot!

Amazing colours in the rocks are evidence of the mineral deposits

The Carretera Austral is a popular cycling route 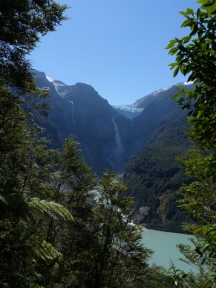 A small hanging glacier with a meltwater cascade

Friendly little Chucao birds, reminiscent of our Robins, hopped around the path as we walked in to see the glacier

We paused for a few days in Puyuhuapi, a lovely village a the head of a fiord

One of several campsite cats that adopted us as we travelled

This was our first contact with the shores of the Pacific, here quiet and sheltered behind Chiloe island

The dramatic road east towards the Argentine border at Futaleufu 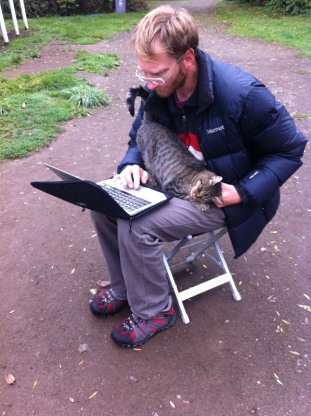 Finding a spot within reach of the wifi signal at the campsite – only problem is that the spot comes with a cat as part of the deal!

FIrst night on Chiloe island, where the Pacific pounds the coast

The landward side is calm and flat, sheltered by the island

Many beautiful Arrayane trees in flower

Sunrise over the town of Dalcahue, Chiloe

Palafito (stilt) houses on the outskirts of Castro, the capital of Chiloe 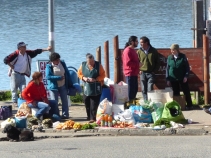 Near the market in Castro

Inside the colourful market

Our first experience of the diverse range of potatoes

Dried mussles! We tried them – better fresh, we think…

A wide range of fresh sea-food 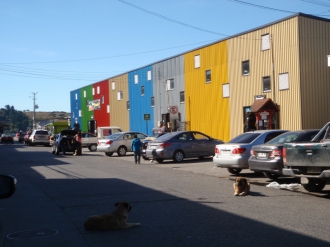 The market is housed in a colourful modern building, reflecting the colourful heritage – and guarded by the obligatory friendly dogs

A lunch of seafood in a palafito restaurant

When the rain and clouds lifted, we got tantalising sight of the volcanos on the mainland

Another night wild camping on the Pacific coast

Cormorants on the coast

More of those beautiful Arrayanes 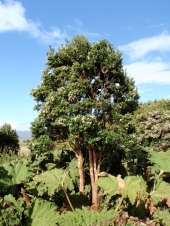 Chiloe is known for its architecture, particularly the colourful wooden churches

This man sells wool products, a speciality of Chiloe 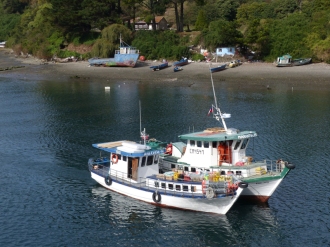 The shores near Puerto Montt, back on the mainland

Getting the old, hole-riddled exhaust replaced – maybe that will stop the awful noise?

Next morning, about 20km up the road, with the noise still with us, Bruce diagnoses wheel bearing wear and we turn round and head back to town 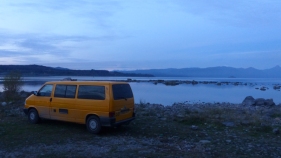 With the van finally, fully repaired, we head north, to enjoy more lakes and volcanos – this is our overnight spot near Villarica

Autumn is with us and now, sunrise is late enough that we enjoy that as well as sunsets!

Finally, we get to see a volcano properly – we take the opportunity of a clear morning to get close to Volcan Villarica 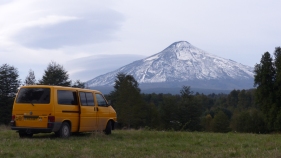 The volcano erupted a few weeks before – this sign informing residents where to get gas masks, reminds us of the realities

We stop in Temuco to see the wonderful, colourful central market 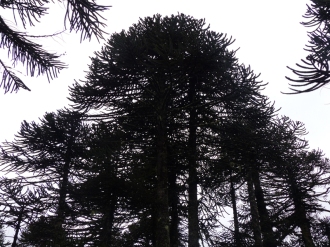 Then on, through heavy rain, into Parque Nacional Conguillo to see another volcano (if the weather clears) and many, many Araucaria (Monkey Puzzle) trees 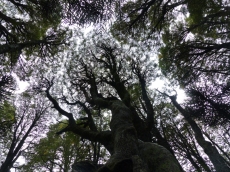 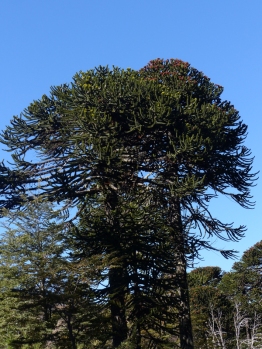 4 responses to “The winding road to Santiago – part 2: Southern Chile”